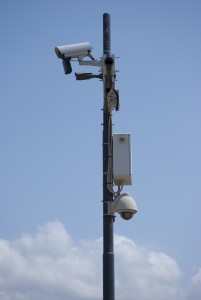 These sensors might be new to the game, but they’re already becoming a highly useful tool in perimeter security. The system works as follows. A central processing unit is installed on the fence line, and a fiber optic cable that is attached to the fence fabric connects to this unit. If there is a disturbance on the fence, the light traveling through the fiber optic cable will be disturbed. The cpu will pick up on this disturbance and interpret it as an attempt to penetrate the fence.

Some of the benefits of fiber optic sensors include the facts that they’re immune to interference from other electrical signals, don’t require a power source, and can perform well even under extreme environmental conditions.

Infrared detection systems are another highly reliable option for perimeter security. The sensor generates an infrared beam that is directed at the perimeter of the facility. If this invisible beam is disturbed by the presence of unauthorized personnel (due to a difference in thermal energy), the sensor will trigger an alert.

Video analytics uses advanced technology that essentially allows software to interpret what’s happening on the video feeds of perimeter security cameras. If the software detects something out of the ordinary, it will trigger an alert. In this way, live feeds don’t have to be continuously monitored, yet retain their effectiveness.

Categories: Security Technology | Tags: perimeter security
This entry was posted on Thursday, April 16th, 2015 at 1:37 pm. Both comments and pings are currently closed.